A fascinating display of how glassware is created. Glass blowing bubbles and shapes come to life in an entertaining way.

Ed and Margaret Burke created E+M Glass in the mid 1980’s. They have been designing and making unique works of art for the table from their studio on the Welsh and English borders since 1988.

An excellent demonstration on the show circuit, with popular hourly demonstrations in their mobile studio.  they have their own distinctive approach to fine glass making, a symbiosis of colour, pattern and shape.  Come and see how they create a unique wine glass out of a small pile of sand – or how the traditional technique of glass blowing is used in making a beautiful vase.  They will also be selling an array of their glassware, including their unique ‘Game of Thrones’ selection.

We have a few different Blacksmiths attending Thame Country Fair, bringing an insight into this fascinating and very traditional English craft. Stokes Blacksmiths are at the majority of our shows.  It is a long standing family business, now run by Chris Stokes, who has been a blacksmith for over thirty years. He says he loves his work because of the creativity involved; the knowledge that he is leaving a legacy in his work that will last for many many years into the future and that fact that he never knows who his next customer will be. You can even have a go too! Make an original hook or keyring and get involved!

Demonstrating the traditional art of walking stick making, choose a stick which really reflects your interests and personality.  From animals to fish, traditional hooked ends and plenty more.

The making of brooms, also known as ‘besoms’ or ‘besom brooms’, consisting of a bundle of twigs (often birch) tied around a stick. They are favoured by some gardeners for specific jobs, sweeping leafs of patios, moss from timber decking or as the broom head wears down and becomes more stiff it can be used for clearing moss or worm casts from lawns or dog hair from rugs. Many people like its natural charm and look well as an ornament in a conservatory or kitchen. Come and see how they are made. 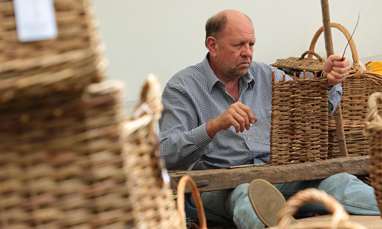 Taste the honey, meet the bees.  A fascinating display from people who understand the world of the bee.

We have two blacksmiths: Chris Stokes and Rob Caley
Stokes  is a long standing family business, now run by Chris Stokes, but started by his dad, a master smith and farrier at the age of eighteen, many years ago. Chris himself has been a blacksmith for over thirty years. He says he loves his work because of the creativity involved; the knowledge that he is leaving a legacy in his work that will last for many many years into the future and that fact that he never knows who his next customer will be. Caley’s Blacksmiths feature Rob, an artistic blacksmith, who works at Westfield Forge in Norfolk England. He produces high quality, hand forged functional and decorative items.

If you want to create fast, jumbo knitting could be your answer. Rachel Johnson will be showing you how and selling you the knitting needles you need.

We also have the very traditional arts of spinning and weaving at Sandringham Craft and Wood Festival.  See how sheeps’ wool is spun into the knitting wool we are so familiar with – often on a giant spinning wheel.

Then watch the master weaver at work. With a

variety of rugs, throws and other products to see, you will be fascinated at how this master craftsman brings the wool together to create such amazing results.

You don’t get much more traditional than the old English craft of corn dollies. Corn dollies were and still are used in pagan ceremonies. It is now a decorative art form which reflect superstitious beliefs. They are used to thank Mother Earth for the Harvest and also as a symbol of good luck and fertility. Watch how they are made with a demonstration of some other old English crafts alongside.

A whole marquee of local woodturners, demonstrating their skills. You will be amazed at the quality and creativity of their work. Watch them in action and ask as many questions as you like: they are very happy to talk about their favourite hobby.

Ian Freemantle is an award-winning Wood Sculptor and artist based in Stony Stratford. His art can be seen at festivals across the UK. He has art installations around the country, including Centre Parcs, Rushmere Country Park, and Green Man Festival.

Ian Freemantle’s inspiration comes from his lifelong love of nature and the natural surroundings he grew up in. Even as a boy he would spend every waking hour in the woods and rolling hills of the Surrey countryside. It was inevitable that he would progress into countryside management, to forestry and arboriculture eventually finding the urge to start sculpting in 2002.

Ian’s work has a style of its own with a vein of mystical realm running through it. Using the natural contours and the strength of the grain he brings individuality to each and every sculpture that he produces. Now residing in the historical coaching town of Stony Stratford, famous for its festivals of music, poetry and the arts, Ian has enjoyed the title and recognition of ‘the Bard’ of the town in 2010.

Over the past 10 years Ian has enjoyed working for many everyday folk, Local authorities, schools and nursery’s and several music festivals including an open invitation to the exclusive Weird and Wonderful Wood festival in Suffolk.

His clients include the Royal Sandringham Estate, Centre Parcs and Dave Grohl of the Foo Fighters. Ian is also famous for the Giant Bardic chair at Rushmere Country Park.

“It takes many years to learn the skills and a lifetime to find the inspiration.”

Fiona Birch will be demonstrating hat weaving from Rushes and Willow Bark, Rush Rope making and Braiding available for the public to have a go. Traditional Clothes Pegs and Wooden Flowers, spoon carving including Welsh Love Spoons. Corn Dollies and Straw Plaiting.

Any cookies that may not be particularly necessary for the website to function and is used specifically to collect user personal data via analytics, ads, other embedded contents are termed as non-necessary cookies. It is mandatory to procure user consent prior to running these cookies on your website.